This past weekend at the North American International Auto Show, the vast majority of everyone’s attention was being focused on the main show floor. That is because while the basement at Cobo Hall can tuck away some surprises, the buzz of the main show floor just doesn’t seem to carry over into the lower level. However tucked away in the basement was one small square of show floor generating a lot of buzz. In an event that openly encourages you to roam around, touch screens, open doors, pop trunks, and generally be very hands on, small automaker Equus was trying a different approach.

For those of you unaware Equus is making headlines for their eye-catching automobile the Bass 770. Starting at $250,000 the Bass 770 probably isn’t going to be a frequent spot going down the road, but make no mistake that when you see one you should be turning your head to follow it.

I was lucky enough this weekend to spend a few minutes with Michael Oualid, the primary financial backer of Equus Automotive Inc. and ask a few of the questions that have been on everyone’s mind since this automaker hit the headlines. The Bass 770 boasts a 640HP 6.2L Supercharged Chevrolet LS9 engine, the same engine used in the 2009-2013 Corvette ZR1. When asked why Equus went with the LS9 Michael explained that Equus had a very good working partnership with General Motors, and that the LS9 boasts a massive amount of performance in a very compact package, especially when considering the supercharger.

Equus had three of their Bass 770’s on display and in a very patriotic move they were red, white and blue. The blue Bass 770 on display is the same one seen in the promotional trailer Equus had produced. Michael pointed out this was their prototype car driven by Ian James, a former American Le Mans series winner. It was noticeably not as polished as the other two cars, which were customer orders that had been recently completed. According to Michael a customer ordering a Bass 770 should expect a wait of about 3-5 months currently for your car to be handcrafted to your specifications. Each one is built to order and virtually every part of the car is customizable to your individual tastes.

When asked about the performance of the car Michael did point out that they were impressed with the power output of the LS9 and that a top speed of 200 mph has been achieved in the test car. However when further questioned about performance stats Michael did point out that Equus is not in the market of competing against the Ferrari’s of the world. They were however here to fulfill the market of buyers looking for a very classic muscle car look but with the styling, amenities, and reliability of a new high-end automobile.

Perhaps the best part of my discussion with Michael was watching his enthusiasm while he discussed the Bass 770. Michael pointed out that the most important thing to him about the car was that when people pull up next to you going down the road they look over and smile, regardless if they were 16 or 60, drivers everywhere appreciate at least something about this car. Well Michael I can tell you that it gets a thumbs up from me. 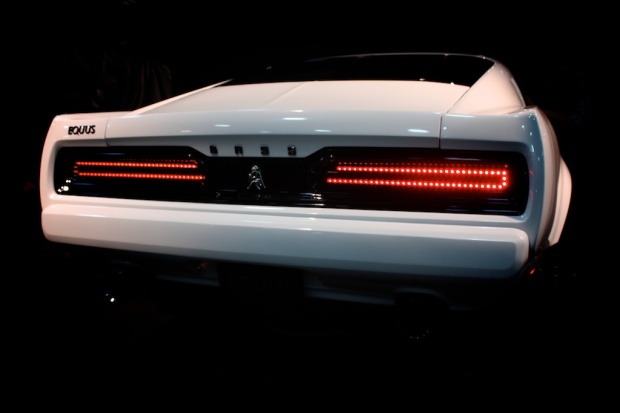